Bordeaux - A Nice Front-End For Wine

Bordeaux is a port town in the southwest of France on the river Garonne. It produces large quantities of wine as well as some of the most expensive wines in the world. The name Wine also associates with software with the help of which you will run Windows programs in Unix without installing a Windows OS.

This article is based on a previously published text written in Slovak: Bordeaux - Zaujímavý frontend pre Wine

Wine is something totally different than emulators such as VMware or Qemu in the environment of which the user must install a Windows OS. The abbreviation of Wine - Wine Is Not an Emulator - is therefore correct, as Wine does not emulate the processor.

Forget the Windows license and save money with Wine. If a Windows program is not free, you then only need to pay the developer for the license of a particular Windows application.

When Wine first slithered to light (with Win32 support already around the year 1995), it had many flaws and veterans remember that, albeit with some difficulties, it could run 16-bit Windows programs (much better than the 32-bit ones). At those times it was difficult to configure and use Wine. This unpleasant heritage has somewhat survived until the present days.

The development of Wine continues. Now Wine runs many Win32 apps well, but the user interface still needs some work, as Wine is less user-friendly. Therefore, a few commercial packages such as CrossOver Office appeared and they run Windows apps effortlessly. If users have fewer demands, they may completely abandon a licensed OS like Windows XP or Vista. Unfortunately, the CrossOver Office's asset mostly demonstrates itself only in Linux and Mac. Unfortunately, Wine has one drawback - it is a little bit difficult to use. Configuring it may become baffling. Of course, the weight of this opinion is not that massive if a user is experienced. But if he or she is not, the Wine's difficult-to-deal-with interface may have a discouraging effect - Unix newcomers need help. This is the reason why there are several software enhancements (front-ends) for Wine - they will facilitate the installation of Win32 applications, will help you tweak the Wine registry, etc.

There are commercial and noncommercial Wine front-ends. Of the commercial ones I may mention Bordeaux for Linux (but also Bordeaux for FreeBSD, PC-BSD). On your way looking for noncommercial Wine enhancements you will also find Wine-doors, WineTools (not maintained anymore), q4wine, WineXS. There are also utilities such as Winetricks that will help you download a number of Windows libraries and auxiliary programs (like fonts, comctl32, MSI Installer, art2min, MS Access runtime libraries, etc.). 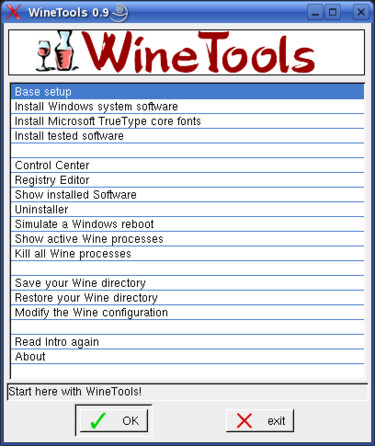 Winetools looks like Bordeaux but it is not maintained anymore

Bordeaux for Linux, when compared with other Wine front-ends, has that advantage that in addition to Linux it is also available for FreeBSD, Solaris, and Mac OS X.

A small company maintains this front-end - Bordeaux Technology Group, the goal of which is to provide the maximum for companies and individuals somewhat or fully employed with questions about using Windows applications in Linux, but also in FreeBSD, Mac OS X, and Solaris.

If you buy the Wine front-end from Bordeaux Technology Group, the company will provide you with quality professional support. Tom Wickline, a guy known for his long-time promotion of the Wine project, is involved in the company, too. He also wrote the documentation for unsupported Windows applications in CrossOver Office and he owns an excellent website (www.wine-reviews.net) where you will find a rich resource of tips, tricks, and instructions on how to use Wine with various Windows applications. People behind the Bordeaux Project also support the Open Source community with their contributive recommendations to source codes. Tom Wickline is listed on the Wine acknowledgment page and he also supports the development of utilities like Winetricks.

A closer look at Bordeaux for Linux / FreeBSD

Bordeaux is a commercial add-on for Wine, but Wine is its dependency. On the other hand, CrossOver Office (a commercial and modified Wine) does not need freely available Wine as its dependency - it runs with its own Wine engine. Bordeaux works with freely available Wine like a wrapper with its own scripts and modified DLL's. Bordeaux for Linux works the same as Bordeaux for FreeBSD, but GNOME environment is preferred. You can purchase Bordeaux for 20 US dollars. You will receive a DEB, TGZ, or SH package that will (after you install it) extract itself onto the /opt directory, where a subdirectory "bordeaux" will be created. You may then run the bordeaux-setup command (in the /opt/bordeaux/bin path). However, for a successful installation you must also have wget and cabextract installed on your system. 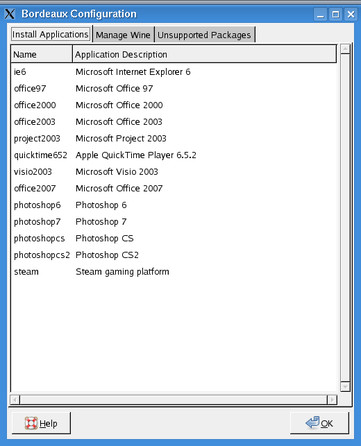 You do not normally need to run the bordeaux-setup command except for situations when Bordeaux installation cannot create its Bordeaux menu, as Bordeaux is primarily intended for GNOME. The menu "Unsupported Packages" in the Bordeaux Setup will help you download many Wine add-ons on the back of Winetricks, so do not be afraid to try other Windows programs you do not see in the main menu list (Install Applications).

If you do not have the Bordeaux menu because of your preference for other X environments (XFCE, IceWM, etc.), you can install Windows applications by running the /opt/bordeaux/bin/bordeaux-setup command. Tell Bordeaux where to find your EXE's...

Wine is indispensable for people who have always been excessively involved with Windows. But Wine and Bordeaux do not conflict with each other. The directory /home/user/.wine will keep all its Wine settings and the directory /home/user/.bordeaux its Bordeaux settings. Bordeaux settings are actually Wine settings, but keeping them in a separate directory (/home/user/.bordeaux) will help you clearly distinguish which Windows programs interact with Wine through the Bordeaux wrapper and which do not. To run Wine directly without interacting with Bordeaux, use the command such as wine /opt/win/demo/demo.exe.